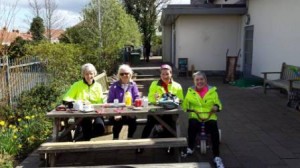 I had my mid-life crisis when I started running fifteen years ago, the day before my fiftieth birthday. I’d never been sporty at school, though if they gave out medals for dodging games lessons, I could have won gold. Fifteen marathons, a 35-mile ultra and running in wonderful places around the world were followed by a non-running-related knee injury, then frozen shoulder which in turn led to a lack of fitness and motivation. It had also taken me some time to adjust to the death of Darren Gordon, a friend and colleague, who’d died aged 27 from malignant melanoma. He was a good runner whose birthday was a week before mine. I’d promised him that I’d raise £6000 for cancer charities, £100 for every decade.

So, without running, what to do? A friend had talked about a long bike ride, which reminded me that I’d wanted to ride from Land’s End to John O’Groats. When he suggested that, as it would be five years since Darren died, I could do it as a fund-raiser, it seemed like a sensible plan. I’m quite surprised that alcohol seems to have played no part in this and I’ll be starting in September with three other women (combined age 234 for the four of us) and a 30-year-old man, plus a couple of others for the first days and others joining us in Scotland. The logistics have been a challenge, to say the least.
There have been many times since then when it’s seemed like the most colossally stupid idea I’ve ever had. There have been days when sixteen miles was a long way and our shortest day is over 55. The last day, the longest, is over 80. Judy, route planner extraordinaire, fell off a horse and broke her arm ten days before we were due to leave so we rescheduled for mid-September which in turn meant changing the route and our overnight stops. Every cloud has a silver lining, though, and Judy’s accident gave the rest of us more time to train. Fortunately she’s managing to catch up on the missed weeks.

What have I discovered so far, with about five weeks before we leave? I’m lucky to live in a beautiful area and the weather’s been wonderful. A road bike really is more fun and while love having company on a ride, I’m also happy to be able to ride 45 miles by myself when just getting out of the door used to be a challenge. I’m stronger and fitter. I have proved to myself that the thought of a bacon roll eight miles ahead can make you go faster but that finding out that bacon supplies have run out is a very disappointment that is difficult to match. I’ve also discovered that when the bacon roll does finally arrive it will taste even better.

So the countdown begins: more long rides then taper, check accommodation and travel details for all of us, practise packing the bike bags (then take out all the stuff I don’t need), rest and eat, then on 9th September, when all we have left to do is ride nearly a thousand miles. Not much at all, really.

You can sponsor me through this link: https://www.justgiving.com/LEJOGforRMCC.

EP Sports Massage Therapist Gail will be joining Jan and co from Lanlivery to Cheddar as car support and providing TLC evening massages.